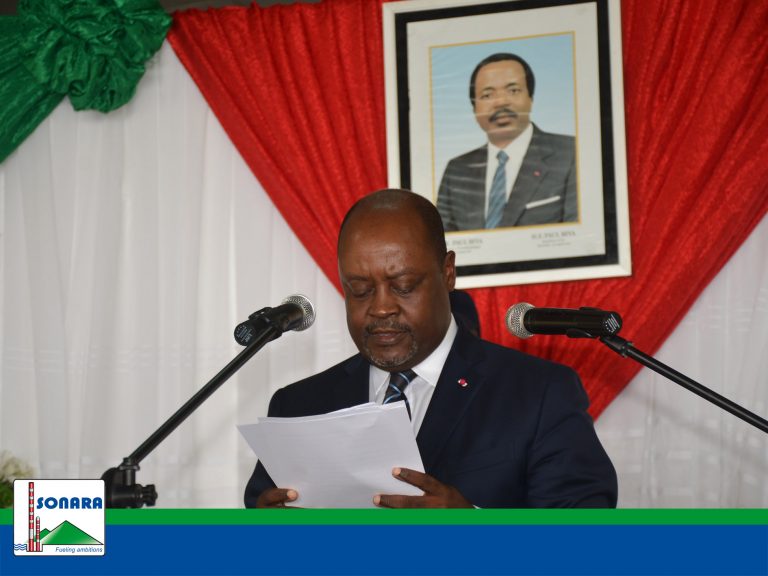 It is with a voice full of emotion, but filled with hope, that I take the floor today, on the occasion of the visit to the disaster site of SONARA, following the fire outbreak of 31 May 2019, for a working session between SONARA workers and the Inter-Ministerial Delegation, to which, I wish a warm welcome to SONARA and a pleasant stay in Limbe.

The Governor of the Southwest Region,

The Senior Divisional Officer for Fako,

Your presence here today, strongly testifies, on the one hand, the great attention that the Government of the New Deal, championed by the Head of State, HIS EXCELLENCY PAUL BIYA, gives to SONARA, and, on the other hand, the will of the President of the Republic, to re-build the units destroyed by the flames, in order to revive our refining activity.

I would therefore like to use this opportunity, to once more express our deep gratitude to the Government, at the head of which H.E the Prime Minister and of course, to H.E Mister PAUL BIYA, President of the Republic, Head of State, for his constant concern towards SONARA and its entire staff.

In the same vein, I would like you to extend, to the right quarters, the immense thanks and gratitude of all SONARA workers, those of the Limbe population, to which gratitude, I add that of the Board Chair, as well as mine, not only for the measures taken by the Head of State to overcome this unfortunate fire incident, but also, and especially, for his commitment to rebuild SONARA, the jewel of our industry and the Head of State’s will and desire to maintain all jobs.